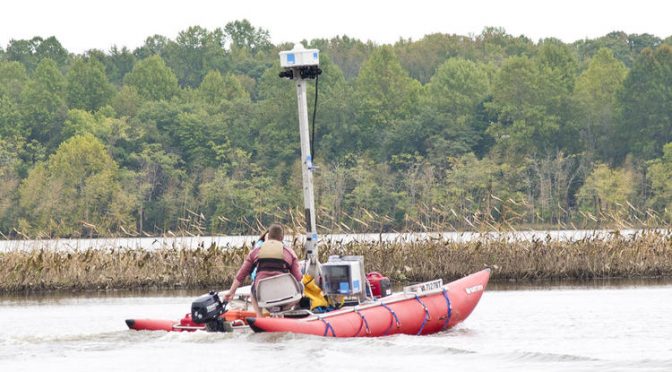 Going where even Google hasn’t gone before:

Anyone, anywhere, will soon be able to see the entire Patuxent River with the Chesapeake Conservancy’s 360 degree virtual tour. Starting Oct. 10, the Patuxent can be seen from a kayaker’s perspective Google Street View-style, which provides a look at the water, outlining land, boat ramps and access sites.

Highlights of tour include the protected waters of Jug Bay Wetland Sanctuary and the scenic Battle Creek Cypress Swamp Sanctuary.

“Many of the folks who have checked out our virtual tours are using them to plan their boating and paddling adventures,” said Jody Couser, director of communications for the Conservancy.

The Riverview tour is the brainchild of Ryan Abrahamsen. Based in Richmond, VA, Abrahamsen has set out to “map the world 360 degrees at a time” with his company, Terrain 360. To do so, he crafted a pontoon raft with a built-in waterproof computer that controls six special cameras atop a 12-foot telescoping tower.

Abrahamsen says the 360 pontoon cost about $15,000 and is pricey to maintain. But he and the Conservancy are confident the views are worth the price and more.

“I want people to enjoy exploring the Patuxent,” he said. “This is a way for people to see places they could never even visit.”

Couser notes the tours can be informative to educators and conservationists.

“When they are wondering what the health of the Patuxent River looked like in 2017, this virtual tour will serve as a marker in time,” she said. “It will be enormously beneficial to those working to protect the river for years to come.”

The cameras on Abrahamsen’s pontoon capture 20,000 to 30,000 images a day, which are edited into a Riverview virtual tour. While he says editing is fairly easy, capturing waterways can have its difficulties. Wind and waves are a challenge, shooting can’t be done in the rain, and he has to wrap up before the sun starts to set.

Then there are the photo bombers.

“While I was shooting the James River a few years ago, a guy actually walked up and mooned me,” Abrahamsen said. “I ended up keeping the shot, but I had to blur him.”

For those planning hiking and biking, Terrain 360 also captures land-locked trails. They’ve mapped locations around the U.S. including North Carolina’s Outer Banks and the Appalachian Trail’s Bearfence Mountain. Next he hopes to outline the Chesapeake and capture the Intracoastal Waterway.

The Patuxent River tour can be seen at chesapeakeconservancy.org.