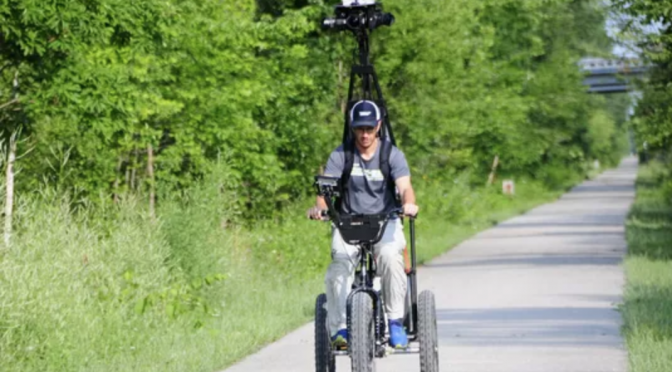 KIMBALL TWP. – Andy Thompson has the wiry and tanned look of someone who spends a lot of time outdoors.

The Richmond, Virginia, resident will be seeing much of southeast Michigan from the seat of a large tricycle. He and his partner, Ryan Abrahamsen, are creating maps of trails and water routes in the seven-county region, starting with St. Clair County.

The company, called Terrain360, uses arrays of five cameras mounted on the trike and six cameras on a twin-pontoon watercraft to capture a 360-degree image about every 50 feet. Thompson says it’s like Google Street View for trails and waterways.

Tuesday, Abrahamsen and Lori Eschenburg, of the St. Clair County Metropolitan Planning Commission and the creator of the Blueways of St. Clair County website, were mapping the Black River as far up as Windsong County Park as well as part of the Island Loop National Water Trail.

Eschenburg said GPS information and the photos will be stitched into an interactive map available on the Terrain360 website.

“Fort Gratiot and Port Huron Township can take their sections from the website,” and use it on their own websites, Facebook pages or promotional materials, she said.

The effort is through the Southeast Michigan Council of Governments, a seven-county regional planning association. Eschenburg said SEMCOG is footing the bill for the mapping.

“It will be all seven counties, but they are starting here in St. Clair County,” she said.

Abrahamsen and Thompson will be mapping 116 miles of blueways in the county, including the Lake Huron and St. Clair River shorelines, and 14 miles of trails including the Wadhams-to-Avoca Trail and the Blue Water River Walk.

“SEMCOG has a ParkFinder app, and we’re going to integrate this into that app,” Abrahamsen said.

Eschenburg said the data will comprise a useful online tool.

“The benefit is people who aren’t able to get on the trails can still enjoy them,” she said, noting that she and Abrahamsen saw two bald eagles on their Black River trip Tuesday. “For planning a trip, you can see all the amenities of a trail or blueway.”

She said the effort could potentially bring St. Clair County to a wider audience.

“People all over the world can be exposed to St. Clair County’s beautiful water and land trails,” Eschenburg said.

Thompson said he spent his Tuesday mapping the Clinton River and Paint Creek trails in Oakland County. He was going to do the 12.5 miles of the Wadhams-to-Avoca trail followed by the Blue Water River Walk on Wednesday before tackling the Macomb Orchard Trail through Richmond and Romeo.

He said he was looking forward to the Mill Creek Trestle on the Wadhams-to-Avoca Trail, which soars about 60 feet above the stream below.

“I’m excited about that,” he said. “I was looking online and saw the pictures.”

Terrain360 announced today the release of its new graphical user interface for www.terrain360.com. The website for interactive panoramic 360° tours of trails, waterways and national parks now boasts an improved user interface, a set of useful new features, easier and faster navigation, taking user experience to a whole new level. The improvements have been designed to provide the ultimate user-friendly experience with better functionality throughout.  END_OF_DOCUMENT_TOKEN_TO_BE_REPLACED

WASHINGTON — The Chesapeake Conservancy has teamed up again with a Richmond virtual tour company to map and record 92 miles of the Patapsco River, including Baltimore’s Inner Harbor.

The virtual footage includes 360-degree views of the river and follows the Captain John Smith Chesapeake National Historic Trail.
The conservancy has also worked with Terrain360 to provide virtual tours of other waterways that feed into the bay including the Rappahannock and the James rivers and Mallows Bay, which is home to what is known as the “Ghost Fleet.”

END_OF_DOCUMENT_TOKEN_TO_BE_REPLACED

After traversing the Susquehanna River last summer, Terrain360 decided its small boat with lots of cameras was ready for urban waters this year.

The Virginia-based firm and Chesapeake Conservancy came to the waters of Baltimore for their latest virtual tour, which has 360-degree views of Inner Harbor and the Patapsco River. END_OF_DOCUMENT_TOKEN_TO_BE_REPLACED

Located in Charles County, The Ghost Fleet of Mallows Bay contains the remains of an emergency fleet of steamships that was commissioned during World War I, but never delivered. The wrecks are now home to natural ecosystems, prompting a nomination for the area to become a National Marine Sanctuary.

Following up on a virtual tour of the entire Susquehanna River and an existing tour of Mallows Bay, the Chesapeake Conservancy once again teamed with Terrain360 to film 360-degree videos of the ship graveyard from above. END_OF_DOCUMENT_TOKEN_TO_BE_REPLACED

Follow the Potomac River about forty miles south of the District and you’ll find more than 200 decrepit, wooden ships lurking around a bend.

The waters of an inlet called Mallows Bay hold one of the area’s most otherworldly scenes. Most of the vessels have been swaying in spot since just after World War I, slowly sprouting greenery from their decks and converging with the surroundings. Last month, President Barack Obama proposed making Mallows Bay and an 875-square mile portion of Lake Michigan the first new national marine sanctuaries in 15 years.
END_OF_DOCUMENT_TOKEN_TO_BE_REPLACED

NANJEMOY, Md. — Hidden beneath the waters of the Potomac River are dozens of sunken ships known as a “ghost fleet” that sailed from the Revolutionary War to after World War I, and now, thanks to the Chesapeake Conservancy, the public can experience these underwater ships and the unique ecosystem that has grown around them from their desktops.
END_OF_DOCUMENT_TOKEN_TO_BE_REPLACED

On the AT - Washington Monument State Park, Maryland