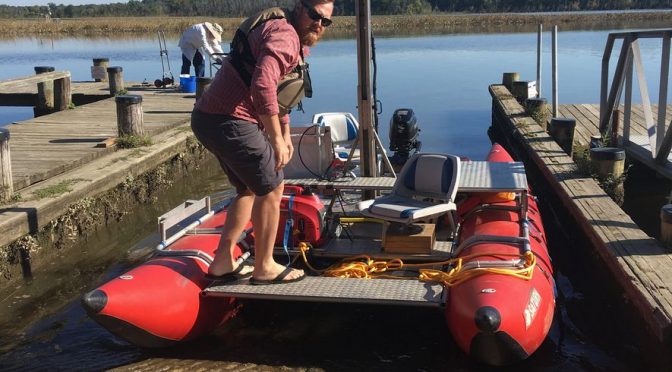 A small boat is traversing the length of the Susquehanna River, from upstate New York to the Chesapeake Bay, for mapping’s sake.

The Chesapeake Bay Conservancy and Richmond, Va.-based mapping outfit Terrain360 teamed up for the summer river cruise. For now, the focal point is a vessel outfitted with six cameras, which take pictures of the Susquehanna River every 50 feet during the trip. There’s some room left for people, too, as a rotating crew will man the boat.
END_OF_DOCUMENT_TOKEN_TO_BE_REPLACED

Thanks to Michael Raphael for the heads up on this very interesting use of outdoor imagery. It’s not lidar, at least not yet, but it is a very cool use of panoramic photography.

Terrain360.com is your interactive trail companion providing 360 degree panoramic tours of some of the most beautiful terrain in and around Virginia. After an incredible day of hiking and kayaking down one of Virginia’s finest waterways, the founding partners of Terrain360.com beached themselves on an island and began brainstorming over what would soon become the most innovative trail mapping software to date. END_OF_DOCUMENT_TOKEN_TO_BE_REPLACED

This summer the James River, all 340 miles of it, will be photographed Richmond-based Terrain 360 and Outside Adventure. On May 8, the boat dubbed the “Photohantas,”  floated around the James River boat landing just north of the swinging bridge at Twin Rivers Outfitters. Busy with kayaks and fishermen in canoes, the river season is already in full swing in Buchanan even on a Thursday at noon.

Using a circular camera set-up featuring 7 millimeter fisheye lenses and camera perched atop a pole, the river will be photographed and sent to Amazon Cloud to have the film put together. END_OF_DOCUMENT_TOKEN_TO_BE_REPLACED

I got a quick taste of what it was like to be a part of a 360 tour photo project — you know, like you’d see on your favorite search website’s street mapping tool — only it was done by a local company and there were no streets. They are mapping the James River.

This summer, Richmond-based Outside Ventures, LLC and the James River Association is working on a groundbreaking project to capture the scenery of the James River in a completely new way allowing online viewers to explore the entire 340-mile length of the James River through high-resolution, 360-degree panoramic images. They said the “Tour of the James” will be the first comprehensive photo documentary of an entire river and will allow the viewer to travel from the headwaters of the James River to its mouth at the Chesapeake Bay.

Six cameras mounted on a stainless steel housing 10 feet above the water’s surface will capture panoramic photos every 30 feet from a custom-made pontoon raft floating down river (see the photos, linked at left). These high-resolution photos will then be stitched together to create a 360-degree augmented reality map of the river corridor. For examples of other 360-degree tours, visitterrain360.com.

The Tour of the James was initiated as a result of Envision the James, a collaborative effort between National Geographic, the Chesapeake Conservancy and JRA. It is the hope that the Tour of the James will share the river experience with a wider audience; empowering Virginians to further explore the wild beauty of the James River. The project will include a virtual and interactive interpretation of natural, recreational and historic features in the river corridor, such as notable rapids, boat ramps and Civil War sites.

If you haven’t seen the Terrain 360 bumper stickers riding around the Commonwealth, perhaps you’ve missed the latest breakthrough in trail technology. Terrain360.com brings users an interactive, virtual platform for navigating Virginia’s hiking trails and mountain biking trails, along with many of Virginia’s waterways and race terrain. Available on PCs and mobile devices, Terrain 360 allows users to explore Virginia’s trail systems from an entirely new perspective with 360 degree panoramic photography. END_OF_DOCUMENT_TOKEN_TO_BE_REPLACED